The creative impulse of my rambling ink drawings and scissor drawn collages find their sources in a rich youthful exposure to the woodland landscape and seasonal cycles of my Southern Tennessee roots. I’d often lay on my back and observe the lines of the canopied world above me.

Like the winding flow of a river, a network of neurons, or the meandering creep of briars overhead, my characteristic marks at times appear random and aimless, but usually combine to reveal a more purposeful intention.

Whether laying down ink washes in multiple layers, or winding my way with a pair of scissors, Ive attempted to reveal a memory, a mood, an emotional warning, or simply a bound and nestled sense of security.

I describe my process as both revealing and cathartic. More often I discover (and welcome) layers of meaning and interpretation well after the work is completed.

As with any creative path, it remains more about the journey than the destination.

More of Mark Garrett’s artwork can be seen on his website or by appointment at his studio in San Francisco most any weekday. 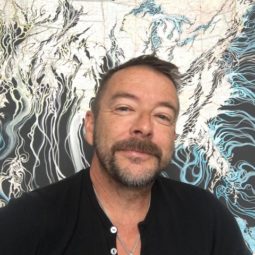 Mark M Garrett’s creative path became clear during his four years of study at the Memphis College of Art from 1982-1985. In 1985 he traveled to Aix-en-Provence, France, for a painting fellowship with the Leo Marchutz School and Residency program. From 1986-88 Mark established a studio and an ongoing body of work in New York City while working as an art handler for Pace Gallery. Moving to San Francisco, he exhibited in collective shows over the next two decades at a variety of San Francisco venues and served as principal matting and framing technician at the Achenbach Foundation for Graphic Arts & the paper conservation Lab at the Legion of Honor in San Francisco. 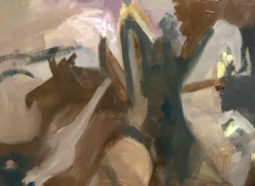 Frances Lerner: After All 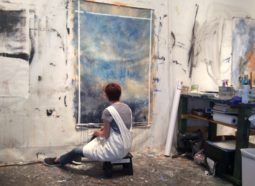