Sacred Objects is a series of reliquaries based on poetry by mystics of the West and the East.

Over the years of exploring and making art in boxes, my work has evolved from containers for mourning to containers celebrating the sacred.

In 1988, after the death of my young son, I was intensely drawn to making sculpture in boxes, cabinets and vitrines. The containers held and protected the tenderness and pain of my grief. Later, when I became an art psychotherapist, I used containers often, particularly with cancer groups and teens. My own containers eventually evolved into houses, of many different kinds and materials, and I have loved the house form ever since.

When I retired, as I became through spiritual practice more conscious of the sacredness of everything, the house shapes began to appear to me as reliquaries: not only holding and protecting the object within, but setting it apart, to frame it, honor it and to speak to its sacredness and preciousness.  And the objects I was particularly drawn to place in these reliquaries – containers for holy relics – were mostly old and worn, or forgotten, things that had been discarded and that had little monetary value. As synchronicity does, I was led to the book “Love Poems to God – Twelve Sacred Voices from the East and West” translated by Daniel Ladinsky. In it, I found this poem by St. Francis that inspired me and confirmed what I believed:

I once spoke to my friend, an old squirrel, about the Sacraments –
he got so excited

and ran into a hollow in his tree and came
back holding some acorns, an owl feather,
and a ribbon he had found.

And I just smiled and said, “Yes, dear,
you understand:

everything imparts
His grace.

I was moved to use the poems, or portions of them, as the basis for most of the Sacred Objects series. Sometimes I unearthed things in my studio, or discovered an object elsewhere, and then found a poem that spoke to it; sometimes I loved a poem and then an object appeared—the synchronicity constantly delighted. Most of the 19th Century porcelain dolls are excavated discards. Without their wigs and face paint they present as more androgynous, abstract, symbolic humans.

When collected together the reliquary houses and their poems become a tiny mystical village, a place—I hope—of stillness, peace, and inspiration for those who commune with them.

Acknowledgement:  I am most grateful to my husband, Lorenzo Valensi, who took on the delicate task of suspending the objects so that they would appear to float, and without whose help with my projects over the years, so many of them would never have been realized. 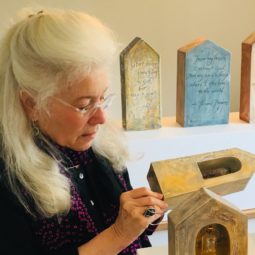 Anna Belle studied sculpture at Rhode Island School of Design and California College of Arts and Crafts, but mid-grad school, she became  interested in costume and set design. She received her MFA in theater design from Brandeis University, and worked in theater and television. That career came to a halt with the birth of her son who had many medical problems. She became an advocate for families with hospitalized children, and, after his death, an AIDS educator and activist while designing and making jewelry. Receiving an MA (and an MFT) from Loyola University in Art Therapy, she worked with many AIDS patients and created the Art Therapy program for the UCLA Cancer Resource Center. She also enjoyed teaching design to graduate students at California Institute for the Arts. Making sculpture on and off - mostly off - over the years, she is now, retired and living in West County with her husband, dog, and Yankl the goat. She is happy to be making art and very appreciative to Commonweal for her first show of sculpture as she enters her seventh decade.  An exhibition of her costume and set design illustrations was seen last summer at the Sebastopol library. Her poems and  Pushcart-nominated essays have been published in The Sun, Calyx, The Networker, Utne Reader and Brain, Child Magazine, as well as the Journal of Art in Psychotherapy, and performed by the Jewish Women’s Theater. 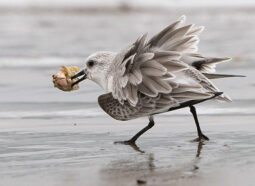 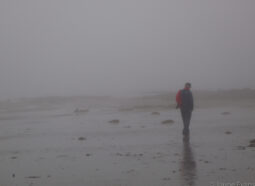 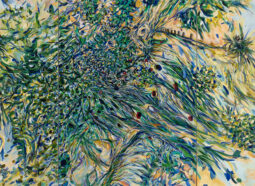